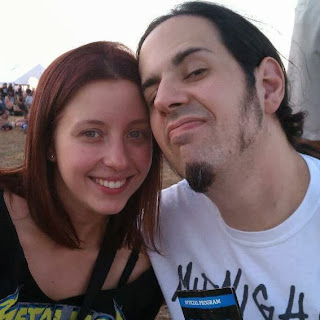 Do you have a nickname or what do your friends call you?
MetalGeorge

Favorite city and why?
There are few things I enjoy more in the world than traveling… except coming home. I really wouldn’t want to live anywhere else than New England, but I have to say that Madison, WI and Montreal Quebec Canada are both two awesome cities I’ve visited over the years.
Yeah, Montreal is pretty amazing. Plus, brothels. Although I’m also a big fan of Toronto.
I am, too. I've been a bit through Canada: through Toronto and Niagara Falls, as well

Religion, if any?
Not applicable.

Are you superstitious at all? Any phobias?
I have pretty bad OCD sometimes, but don’t harbor too many superstitions, although I’m sure a couple slip through. Phobias? Sharks. They’re positively terrifying. Those soulless eyes drive me to drink (which admittedly isn’t very hard).
How does your OCD manifest itself?
In lots of things, but probably most with technology, machinery and my media collection. For example, I'm really anal retentive with my car, computers, televisions and how my movie/CD collections are organized and handled. Also, I have to shower/groom in the exact same order every day, otherwise I'll have to start all over! My wife would probably say I'm crazy for how I act sometimes, but the way I see it: I'm not hurting anyone, and my idiosyncrasies could definitely be worse. I've actually calmed down a bit over the years with much of it.

Do you smoke/drink? If so, what? Any bad habits?
Haha! Speaking of which! I smoke cigarettes and drink socially, although my past lives included some pretty hardcore boozehounds, I think. When I was younger, I definitely used alcohol as a crutch for unhappiness. It was always my first go to. Other bad habits including biting my fingernails, fidgeting and playing with my hair. I’m one ball of nervous energy.
I have trouble not playing with your hair too. It’s so dreamy!
Haha... I've heard that before.

Current occupation/Dream job:
I’m a writer, which IS my dream job. I only wish I had more time to do it, and had more time away from my day job at a grocery store to write full time… but, as many out there know all too well, freelancing rarely pays the bills.
Sing it, brother! I’m doing this blog for free, for fun, and maybe some exposure. But money? *laughs* Maybe I’ll get around to making t-shirts if it takes off. After all, a “You Are Entitled To My Opinion” t-shirt is a double-reference.
Yeah, I feel tremendously lucky as it is to have a number of writing gigs which DO pay, which is more than many can probably say. I just wish the market was as such that these many could share in some of the modest successes I myself have been privileged to achieve over the years. It sucks that there are so many hard working writers out there who have their dreams of writing professionally crushed  by an industry which would much rather have fast and cheap work done for free, rather than paying for someone who legitimately cares about delivering the best possible work with the applicable research.

What do you like to do when you’re not at work?
Listen to music, watch movies, hang out with the wife and handle electric bass/vocals in my band, Social Call.
Dude! I had no idea you were in a band! Where can I check it out?
We're still in the embryonic stages as far as getting it out there. We're doing pre-production recordings now on our songs, and should be playing shows by the end of Autumn, if all goes well. I was in a previous band called The Accursed (http://www.facebook.com/theaccursed) which was signed to Screaming Ferret Records and released our Seasons of the Scythe debut in 2005. For almost a decade, that and writing defined my life, and it was a period which I'll never trade for the world. At this point, making music is more of a passionate hobby than a full time job, but it's something I'll never leave completely.

What is your zombie outbreak survival plan?
Ally myself with some inventive, crafty folks with skills. Arm myself with as much food, medicine and weaponry as possible. Aim for the head.

Weapon of choice:
Something semi-automatic, with a sharp melee weapon as a last resort.

Do you have any special skills?
Nothing out of the ordinary, I don’t think. I think I’m pretty talented at vocal harmony.

Did you go to college and, if so, what for?
UMASS Dartmouth grad with a double major in writing/lit and communications.

What is your favorite animal?
Kittiiiieeeees.

Speaking of pets, any pet peeves?
Many. Ingrates or anyone with an inflated sense of entitlement. Ignorance and rudeness also fuels my burning fire of hatred for most of the human race.

Favorite/Least favorite Food:
I love food, and I like to consider myself fairly open minded. I love to cook, and would list Chinese, Vietnamese, Italian, Indian and Middle Eastern cuisine as some favorites.

What is the best thing that ever happened to you?
Meeting and marrying my wife.
Yeah, man, you’re lucky! She’s a catch!
Yeah, I definitely married up! :)

What is the worst thing that ever happened to you?
I try and move past and learn from those experiences.

Ever had your heart broken? Is there a story worth telling behind your answer?
Of course. Don’t trust anyone who hasn’t.

Ever broken someone’s heart? Is there a story worth telling behind your answer?
Unfortunately, I fear this is probably true.

What is the best thing you’ve ever done?
Being charming enough for my wife to say “yes”.

What is the worst thing you’ve ever done?
Pleading the fifth on that one.

If you could kill one person, consequence free, who would it be and why?
YOU. I kid, I kid. Does it only have to be one?
Nope. You can feel free to run with the questions.

What do you do?
I’m a writer/critic/journalist. You choose!

How did you get started doing what you do?
I did a music fanzine, Unhallowed, back when I was in college. I wrote for a number of mags and websites before landing a job at Metal Maniacs Magazine. From there I rose up to contributing editor until the mag sadly went under, after which I just continued to do what I do, writing about my passions: music and movies. I don't want to be pigeonholed, however, and have spent time writing for a number of mediums, including newspapers (The Standard Times), blogs (Metal Army America) and traditional, print magazines.

What is your advice to other people that want to get started doing what you do?
Do it because you love this stuff. Don’t put your opinions up for sale. Don’t do it for free promos, fame or to ingratiate yourself into “the scene.” Write about the subjects about which you are passionate, and positive things will come your way.

What projects are you working on?
I currently write for Rue Morgue Magazine, Outburn, Zero Tolerance, Examiner.com, 10kBullets, CBS Boston and more. That keeps me pretty busy!

What are you watching?
Crystal Lake Memories: The Complete History of Friday the 13th

What are you listening to?
Great White: ‘Once Bitten’.

What are you reading?
Film and Television Scores 1950-1979 by Kristopher Spencer.

Least favorite band/song?
Do you want to keep me here all day, Scott?
*laughs*

Desert Island Music/Movies/Books: You know the deal. Five of each.
Fuckin’ ell. Right now it’s Music: Queensryche: Operation Mindcrime, Helloween: Keeper of the 7 Keys Pt. II, Metallica: Kill ‘Em All, Thin Lizzy “Thunder and Lightning” Iron Maiden: Somewhere in Time. I’ll have to get back to you on the other two.
Fair enough.

If you could do anything other than what you do now, what would you do?
Just do what I do on a more professional level…and tour a bit with the band!
How would people go about hiring you or booking the band?
I'll probably create a booking email for Social Call, but for the time being, simply email me at george.m.pacheco@gmail.com

Closing questions / summary / and thanks:
Thanks very much for doing this with me; it’s my honor and pleasure! Thanks also to all who take the time to read this, I appreciate it!
That’s the spirit! A lot of the victims, I mean subjects, I mean interviewees, don’t seem to know what to do with this part and it’s like, “Have you ever seen an interview?”. This is where we thank each other and sign off. It’s not that complicated people!
On that note, thank you for subjecting yourself to being interviewed by me.
Looking forward to hanging out IRL in the near future.
Unfortunately I work weekends so I won’t be able to be at Josh’s movie marathon but I will be at the Halloween 4 screening and at Rock & Shock one way or another so if you’re going to be at either of those I’ll see you and your beautiful wife there!

About the Interviewee:
George Pacheco is an arts & entertainment writer based in New Bedford, Massachusetts, specializing in music and film. Mr. Pacheco has written for such publications as The Standard Times, Metal Maniacs, Outburn, Rue Morgue and more while dividing his time as a musician, husband...and father of two cats.

About the Interviewer:
Scott Lefebvre has probably read everything you've read and can write about whatever you want him to write about.
Mostly because when he was grounded for his outlandish behavior as a hyperactive school child, the only place he was allowed to go was the public library.
His literary tastes were forged by the works of Helen Hoke, Alvin Schwartz and Stephen Gammell, Ray Bradbury, Richard Matheson, Stephen King, Clive Barker, Edgar Allan Poe, and H. P. Lovecraft.
He is the author of Spooky Creepy Long Island and a contributing author to Forrest J. Ackerman’s Anthology of the Living Dead, Fracas: A Collection of Short Friction, The Call of Lovecraft, and Cashiers du Cinemart.
His reviews have been published by a variety of in print and online media including Scars Magazine, Icons of Fright, Fatally Yours and Screams of Terror, and he has appeared in Fangoria, Rue Morgue and HorrorHound Magazine.
He is the Assistant Program Director for The Arkham Film Society and produces Electronic Music under the names Master Control and LOVECRAFTWORK.
He is currently working on a novel-length expansion of a short-story titled, "The End Of The World Is Nigh", a crowd-funded, crowd-sourced, post-apocalyptic, zombie epidemic project.
You can check out the blog for the book here: theendoftheworldisnighbook.blogspot.com
You can check out the Facebook Fan Page for the project here: www.facebook.com/TheEndOfTheWorldIsNighBook
You can check his author profile at: www.amazon.com/Scott-Lefebvre/e/B001TQ2W9G
You can follow him at GoodReads here: www.goodreads.com/author/show/1617246.Scott_Lefebvre
You can check out his electronic music here: soundcloud.com/master_control
And here: master-control.bandcamp.com
You can check out his videos at: www.youtube.com/user/doctornapoleon
You can check out his IMDB profile here: www.imdb.com/name/nm3678959
You can follow his Twitter here: twitter.com/TheLefebvre or @TheLefebvre
You can follow his Tumblr here: thelefebvre.tumblr.com
You can check out his Etsy here: www.etsy.com/people/arkhamscreenings
You can join the group for The Arkham Film Society here: www.facebook.com/groups/arkhamscreenings
You can stalk his Facebook at: www.facebook.com/TheLefebvre
You can e-mail him at: Scott_Lefebvre@hotmail.com

Posted by Scott Lefebvre at 4:22 PM