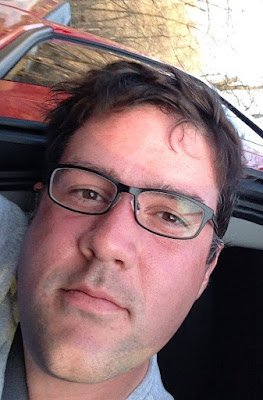 Do you have a nickname or what do your friends call you?
Due to my last name, everyone just calls me Coke.
I can only imagine what that must be like.  So many “Coke versus Pepsi” jokes and cocaine references.  You must have super strong eye muscles from rolling them all the time.  Like, you could probably crush an aluminum can just by looking at it.
Oh yeah.  I think I've heard every variation on the joke possible, at least in English.  Perhaps there are new puns in Mandarin I'm unaware of, but that would be it.

Favorite city and why?
Kansas City

How would you describe yourself physically?
Tall, dark, and fat.
As Meatloaf sings, “Two out of three ain’t bad.”
I think “I'd do anything for love but I won't do that” is about his experiences on the set of The Rocky Horror Picture Show.  I hear Tim Curry really got into character.

How would someone else describe you physically?
Uh, are they feeling nice?
Are they?
Well, are they?

The first thing people notice about you is…
My height.

Religion, if any?
None.

Are you superstitious? Any phobias?
No superstitions.  I have a type of claustrophia.  It's not small spaces, it's not being able to leave.  Being locked in a room the size of a house will trigger it, but being in a plane won't.  I think it's because the plane is going somewhere.

Do you smoke/drink? If so, what? Any bad habits?
I am a mostly ex-smoker.  I vape now.

What do you like to do when you’re not at work?
I love mountain biking, though I haven't been out lately.

What is your zombie outbreak survival plan?
Dig the guns out of attic and find a nice place in the middle of nowhere.
Now everyone knows where your guns are.
They know where most of them are.

Do you have any special skills?
I'm pretty good at doing math problems in my head.

Did you go to college and, if so, what for?
Yes, got an English degree.  Also law school.

Any pets?   If so, what are they and what are their names?
Three cats, Sam, Pippin, and Merry.

What is your favorite animal?
I have a soft spot for black labs.

Speaking of pets, any pet peeves?
Idiots who stick to their guns.

What is the best thing that ever happened to you?
I took my now wife, then girlfriend to Kauai.  It was a magical week.  Even having the car rental place freeze all my money and we had to scam our way into a luau.  Which was an amazing luau.
What is the worst thing that ever happened to you?
I grew up as  Jehovah's Witness.  It's a very silly, nasty religion.  I suspect I'd be much better person if I hadn't spent my childhood in a cult.
Weren’t the Jehovah’s Witnesses started as a turn of the century end of times cult?
I don’t even know what book they follow.  I read “The Bible” because living in a Judeo-Christian dominated culture it seemed like a good idea to read the source material.  I read the Book Of Mormon because it was different than The Bible and that was a really weird experience.  That book doesn’t make any sense at all and I’m amazed that anyone is able to base their lives around it.  I haven’t read The Koran, but it’s on my list of books to read.
The Witnesses were more or less a turn of the century end of times cult.  It's actually a descendant of the Millerites, who were predicting the end of the world in the 1830s. You may have heard of then in your social studies class. The Witnesses are like the second cousin to 7th Day Adventists.  Of course they don't tell you this stuff when you are in the Witnesses.  While the bible seems to have seeped into my brain in ways I can't get past, I pretty much immediately get bored when someone breaks out the God jabber.  One of my minor problems with the Witnesses is how BORING everything is.  It's like they think that by making everything feel like an insurance convention held in the conference room of a Motel 8, they're proving how much they love Jesus.  Because they obviously aren't there for the fun of it.  Say what you will about the Mormons, at least they have some badass architects.
All I remember about them is that they don’t let you celebrate your birthday or Halloween.  I don’t really care about my birthday, but requiring their followers to abstain from Halloween is a definite deal-breaker.

What is the best thing you’ve ever done?
Well, I started my own law practice in a very clutch maneuver after getting laid off.  So that is probably the most impressive thing I've ever done.

What is the worst thing you’ve ever done?
I stay up at night sometimes remembering stupid, mean things I did as a kid.  I wasn't a bully, but I had my moments.

How did you get started doing what you do?
Graduated law school.  Got laid off.  Started my own practice.

What is your advice to other people that want to get started doing what you do?
Look around, find all those things that are done that way just because they've always been done those ways.  Do them the way they should be done.

What are some of the projects you’ve worked on/finished in the past? Give us a little history if you will.
Writing wise, I have who knows how many half-finished novels, four or five fantasy worlds, and all sorts of fragments.  I have the three novels in this series in the can, and I'm about 80,000 words deep on my current project.

What projects are you working on now?
The working title is Before the Fire.  It's a bit of a genre bender.  I like to make discovering the world part of plot, so questions like this make me worry about spoilers.

What are you watching?
Women's World Cup at the moment.  I feel a Venture Brothers marathon coming on.

What are you listening to?
I love Alcest, Amesours, and Les Discrets.  They've been my main playlist for a year or so now.  Jimi Hendrix has been working his way back in lately.
Jimi Hendrix is such a powerful musical influence that you can spend your whole life trying to get out from under his shadow.
Why would I want to be out of his shadow?  He rules.
I mean, like, if you’re trying to do your own thing musically.  Because unless you’re some kind of crazy musical genius, nothing you do will ever hold a candle to what he did.

What are you reading?
2666 by Roberto Bolano.

Favorite band / song?
This changes so often.  Right now my favorite band is Amesoeurs, and I'll cheat and list their whole discography as my favorite.

Least favorite band / song?
Black Eye Peas, the one where they say Mazeltov.

Who would you want to meet that you haven’t met? You get three choices:
Alive. Dead. Fictional.
Thomas Pynchon, Jan Zizka, the Joker.

Are there any questions that I didn’t ask that you wished I had asked that you would like to answer now?
Can't think of anything.

Pitch parade:
Give me all of your links for things you want to promote.   All of them.
Facebook: https://www.facebook.com/justinwcoke
Twitter: @coke1J 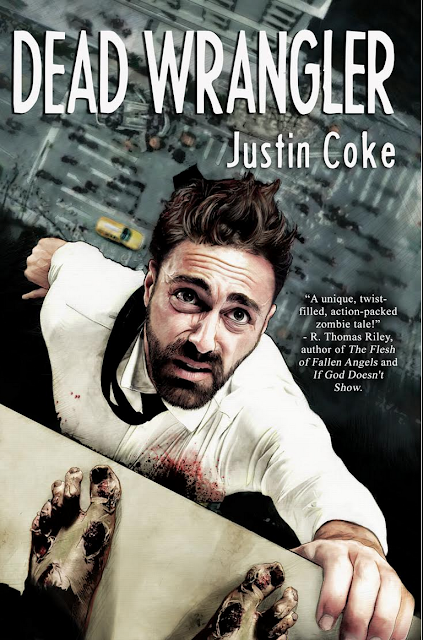 About the Interviewee:
Justin Coke lives in the middle of Missouri. He enjoys mountain biking, scuba diving, Lovecraft, fishing, soccer, pizza, and good beer. He wrote Like Father, which appeared in Wicked Words Quarterly. He also has 42,769 comment karma on Reddit.


About the Interviewer:
Scott Lefebvre can write about whatever you want him to write about.
Mostly because when he was grounded for his outlandish behavior as a hyperactive school child, the only place he was allowed to go was the public library.
His literary tastes were forged by the works of Helen Hoke, Alvin Schwartz and Stephen Gammell, Ray Bradbury, Richard Matheson, Stephen King, Clive Barker, Edgar Allan Poe, and H. P. Lovecraft.
He is the author of Spooky Creepy Long Island, and Condemned; and a contributing author to Forrest J. Ackerman’s Anthology of the Living Dead, Fracas: A Collection of Short Friction, The Call of Lovecraft, and Cashiers du Cinemart.
His reviews have been published by a variety of in print and online media including Scars Magazine, Icons of Fright, Fatally Yours and Screams of Terror, and he has appeared in Fangoria, Rue Morgue and HorrorHound Magazine.
Check out his publishing imprint Burnt Offerings Books here:
http://burntofferingsbooks.blogspot.com/
Check out his electronic music here: soundcloud.com/master_control
And here: master-control.bandcamp.com
Check out his Etsy here: www.etsy.com/shop/ScottLefebvreArt
Stalk his Facebook at: www.facebook.com/TheLefebvre
E-mail him at: Scott_Lefebvre@hotmail.com
Posted by Scott Lefebvre at 3:45 PM