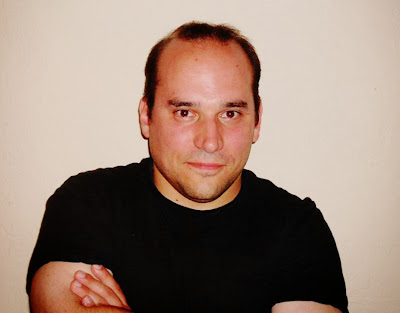 Do you have a nickname or what do your friends call you?
Ed…my editor calls me “Campfire Grandpa” because of the folksy way I spin yarns.  He was shocked when he found out I was only 37.  He said I have an older voice in my writing.
It’s because you sound like Tom Waits on the phone.
That’s also my bedroom voice.
Oh my…

Favorite city and why?
Newport, RI because it’s an old town with history and character.  Between the cobblestone streets, the old church, the little graveyards with worn gravestones hidden between colonial and modern structures, Newport is a great juxtaposition of the old and the new.
I worked in Newport last summer and fall.  I worked two twelve hour shifts two nights in a row and I was commuting an hour to work by bus, so more often than not I’d just crash on the island between shifts.  The island certainly has its charms.

Religion, if any?
Agnostic.

Are you superstitious at all?
Yes.  I’m a bit OCD about germs/locking doors.
Germs can lock doors?  We’re all DOOMED!
Actually, I’d love it if germs could lock doors.  It would make my life a lot easier.

Any phobias?
I’m terrified of spiders.

Do you smoke / drink?
I have asthma, so I don’t smoke.  I do drink socially.  My favorite drink is Grey Goose and cranberry.  I love the taste and the color.

Current occupation / Dream job:
I’m a clinical psychologist, which is my dream job.  I work with autistic and Down Syndrome individuals.  I find my work very fun and rewarding.

What do you like to do when you’re not at work?
I like to spend time with my wife and son, write, shoot pool, see movies.

What is your zombie outbreak survival plan?
Head to the wilderness, preferably a mountainous area, where there is less population density and terrain difficult for the undead to traverse.  Find a good water source.  Plus it’s high ground; you can see them coming.  Live off the land, hunt, fish, etc.

Weapon of choice:
Any melee weapon, like a baseball bat or crowbar.  They’re silent and never run out of ammo.  Great for caving in skulls.
You ever try to cave in a skull with a baseball bat?  It’s a lot harder than you think.
I mean, I imagine that it would be a lot harder than you think.  *walks off whistling*
Hey, I’m Italian…let’s just leave it at that.  You may know too much now.
Every other interview I do ends up having a death threat in it.  You’d better get in line.  If I do go missing someday or found dead it’s definitely going to be an interesting investigation.

Do you have any special skills?
Crisis assessment and management, great people skills/excellent negotiator (for dealing with other survivors).

Did you go to college and, if so, what for?
I have a Ph.D. in Clinical Psychology.

Any pets?   If so, what are they and what are their names?
I had an iguana named Genghis for 10 years, but he passed away this past May.  He was the best pet I ever had, like a member of the family.  Now my son and I are the only animals in my household.  My poor wife.

What is your favorite animal?
Green Iguana.

Speaking of pets, any pet peeves?
Rudeness, lack of consideration for others.

What is your favorite quotation / motto / saying?
“Fortune favors the bold.”-Virgil
Love that one!  I also love “God hates a coward.”
I have a saying of my own:  “There are 2 kinds of people…those that believe there are 2 kinds of people, and those that don’t.”   That one’s free.  The next will cost you.
You’re going to have to hook me with something stronger than that.  What else you got?
“If at first you don’t succeed…try something different.”
“When faced with two evils, I usually go with the one I haven’t tried yet.”
Ha! Sold!

What is the best thing that ever happened to you?
Marrying my wife / my son being born.

What is the worst thing that ever happened to you?
My mother passed away suddenly at the age of 67 two years ago.  She was an amazing human being and a true matriarch.

Ever had your heart broken?
I’ve never had my heart broken per se, but there were times when I pursued a girl, but she just wasn’t into it, or she was at first and then lost interest.  Happens to the best of us.  I believe rejection is a part of life.

Ever broken someone’s heart?
Unfortunately, I think so once or twice, through no intention of my own.  Sometimes the other person digs you more than you dig them, and when they fall fast and hard it’s near impossible to let them down easy.  But I always tried to be a gentleman.

What is the best thing you’ve ever done?
Become a father.

What do you do?
I’m a clinical psychologist.

How did you get started doing what you do?
I was originally an engineering student and hated it.  I switched to psychology because of an amazing professor I had who told the coolest stories.  I went to see a famous (now deceased) psychologist, Dr. Albert Ellis, and wanted to do what he did.  I applied to doctoral programs, got in, chose one where the faculty was connected to Dr. Ellis, and scored a work study position studying under him.

What is your advice to other people that want to get started doing what you do?  Get really good grades (these programs are really selective), do research with a professor undergrad, volunteer for work study positions in the field, and then apply to MANY programs (there’s a high rejection rate). 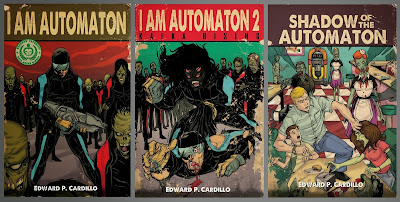 What are some of the projects you’ve worked on/finished in the past? Give us a little history if you will.
I Am Automaton, I Am Automaton 2:  Kafka Rising, and Shadow of the Automaton:  I Am Automaton Book 3 (Severed Press) are sci-fi/horror/zombie techno thrillers about using the undead to penetrate inaccessible cave systems and eliminate terrorists.  I got the idea from watching CNN one night when the US military was still searching for Bin Laden (who was believed to be hiding in the extensive Tora Bora cave system).  To quote British zombie author Sean Page, the I Am Automaton series is “like the author stuck Dawn of the Dead and Homeland in a blender then maybe sprinkled in a little 1984.”  Books 1 and 2 won Readers’ Favorite International Book Awards (book 1 finished in its category with NY Times Best Seller Daniel Silva).
The Odd Tales of an Old Man (J Ellington Ashton Press) is a coming-of-age horror tale in the tradition of Tales From the Crypt and Twilight Zone, in which a curmudgeonly grandfather dying from caner bonds with his grandchildren over tall tales that are morality plays with twist endings.  His two wayward grandsons wonder whether the tales are indeed fiction…that is, until one grandson has a ghastly encounter with one of the monsters from the tales.  Is it enough to scare him and his brother straight?
I don’t know!  Is it?
You’ll just have to read it to find out.  No spoilers here.
Fair enough. 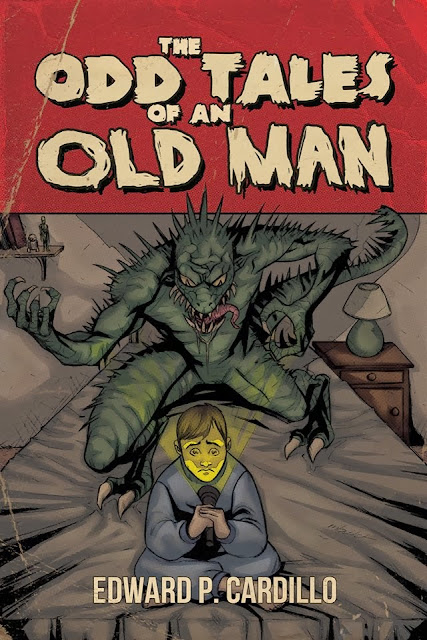 What projects are you working on now?
I’m currently working on a zombie novel for Severed Press.  All I can say now is that the story and characters are very personal to me, and, rather than focusing on action, I aim to make this the scariest fucking zombie novel ever… kind of like ‘The Exorcist’ of zombie novels.

What are you watching?
Game of Thrones, The Walking Dead, CNN

What are you reading?
Richard Laymon’s “Funland”.

Favorite author / book?
Ready Player One by Ernest Kline.  The most fun book I’ve ever read.  EVER.  Great sci-fi and 80’s nostalgia.

Least favorite band / song?
Justin Bieber / anything by him.

Who would you want to meet that you haven’t met? You get three choices:
Alive. Dead. Fictional.
Bruce Campbell / Confucious / Daenerys Targaryen.
I’ve actually met Bruce Campbell.  I was coordinating a convention in Los Angeles and he was one of the main guests.  And let me tell you, he’s just as cool in person as you think he is.
I’m not surprised.  He seems really cool.  My friend Rob got me a personalized autograph of Make Love the Bruce Campbell Way.

What’s the best and worst job you’ve ever had?
Best job-psychology private practice, worst job-manager of a snack bar at a really snooty country club (self-explanatory, I think).

Thanks for letting me subject you to being interviewed!
You are most welcome!

Pitch parade:
Give me all of your links for things you want to promote.   All of them.
Facebook: https://www.facebook.com/edward.cardillo
Website: edwardcardillo.com

About the Interviewee:
Edward P. Cardillo lives in New York with his wife and son.  As a psychologist he treats anxiety and phobias; as an author he concocts tales to terrify his readers.  He enjoys both jobs immensely.  He’s very involved in the zombie community online and on Zombiepalooza Radio, and he is a fiction workshop leader at the Bronx Loaf, a writers’ conference for inner city youth to help them develop their identity as writers and their writing.  He’s also a metal head and one hell of a pool player.


About the Interviewer:
Scott Lefebvre can write about whatever you want him to write about.
Mostly because when he was grounded for his outlandish behavior as a hyperactive school child, the only place he was allowed to go was the public library.
His literary tastes were forged by the works of Helen Hoke, Alvin Schwartz and Stephen Gammell, Ray Bradbury, Richard Matheson, Stephen King, Clive Barker, Edgar Allan Poe, and H. P. Lovecraft.
He is the author of Spooky Creepy Long Island, and a contributing author to Forrest J. Ackerman’s Anthology of the Living Dead, Fracas: A Collection of Short Friction, The Call of Lovecraft, and Cashiers du Cinemart.
He is currently working on ten novel-length book projects which will be released in 2014.
He also publishes themed collections of interviews from his interview blog You Are Entitled To My Opinion.
His reviews have been published by a variety of in print and online media including Scars Magazine, Icons of Fright, Fatally Yours and Screams of Terror, and he has appeared in Fangoria, Rue Morgue and HorrorHound Magazine.
He is the Assistant Program Director for The Arkham Film Society and produces electronic music under the names Master Control and LOVECRAFTWORK.
He is currently working on a novel-length expansion of a short-story titled, "The End Of The World Is Nigh", a crowd-funded, crowd-sourced, post-apocalyptic, zombie epidemic project.
Check out the blog for the book here: theendoftheworldisnighbook.blogspot.com
Check out the Facebook Fan Page for the project here: www.facebook.com/TheEndOfTheWorldIsNighBook
Check his author profile at: www.amazon.com/Scott-Lefebvre/e/B001TQ2W9G
Follow him at GoodReads here:
www.goodreads.com/author/show/1617246.Scott_Lefebvre
Check out his publishing imprint Burnt Offerings Books here:
https://www.facebook.com/pages/Burnt-Offerings-Books/1408858196016246
And here: http://burntofferingsbooks.blogspot.com/
Check out his electronic music here: soundcloud.com/master_control
And here: master-control.bandcamp.com
Check out his videos at: www.youtube.com/user/doctornapoleon
Check out his IMDB profile here: www.imdb.com/name/nm3678959
Follow his Twitter here: twitter.com/TheLefebvre or @TheLefebvre
Follow his Tumblr here: thelefebvre.tumblr.com
Check out his Etsy here: www.etsy.com/shop/ScottLefebvreArt
Join the group for The Arkham Film Society here:
www.facebook.com/groups/arkhamscreenings
Stalk his Facebook at: www.facebook.com/TheLefebvre
E-mail him at: Scott_Lefebvre@hotmail.com
Posted by Scott Lefebvre at 5:27 PM