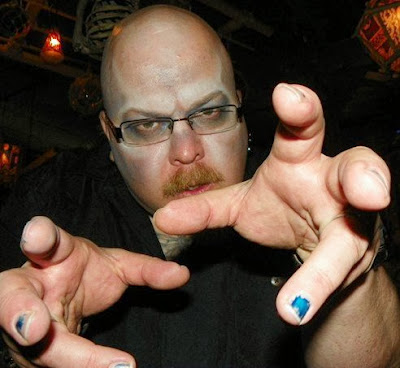 Full Name:
I'd rather not for privacy purposes.  Chad Savage will do.

I can respect that. Chad Savage it is then!

Do you have a nickname or what do your friends call you?
My nickname in the haunted attraction industry is "Busy Butt". I acquired it because, from July through October, half the emails I receive begin with "I know you're busy, but…"
I thought it was just because you communicate like a bee does and you always know where the best honey is.

Current hometown:
Mishawaka, IN (just a bit outside of Chicago)

Favorite city and why?
Chicago. It has everything you want from a big city, without the attitude.
Runner up: New Orleans.

How would you describe yourself physically?
If I'm being generous? Bald 'n' stocky.

How would someone else describe you physically?
That biker-looking dude with the tattoos.
That's a quote from a stranger asking a friend about me.
That sounds about right.

The first thing people notice about you is…
That guy sure is confident considering he's that ugly.
Aw, pumpkin! You’re not ugly!

Religion, if any?
None, at least in terms of organized religions.
What about in terms of disorganized religions?
I like the Native American conceit that everything in our lives is holy, that all things have a little piece of god in ’em. If you conduct yourself accordingly, it’s really hard to do the wrong thing.

Are you superstitious at all? Any phobias?
Not really, no.

Do you smoke/drink?   If so, what?   Any bad habits?
Jack Daniels is my best friend and worst enemy.

What do you like to do when you’re not at work?
Fine dining, books, movies, family time… to be fair, though, my work and my hobbies are so intertwined it's hard (sometimes) to clearly define where one has ended and the other has begun…

What is your zombie outbreak survival plan?
You're not my wife or my daughters? Fuck you.

Weapon of choice: For zombies?
Hatchet in one hand, claw hammer in the other.
I totally figured you for the hatchet/hammer type.
I need to invent the Hamchet. Or Hatcher.

Do you have any special skills?
Oh my, yes. *in George Takei voice* “Oh my…”
Nope – Professor Farnsworth, Futurama.

Did you go to college and, if so, what for?
Yes, University of North Texas, graphic design & illustration.

What is your favorite animal?
Wolves.

Speaking of pets, any pet peeves?
Oh my, yes. Most of them stem from stupidity and/or willful ignorance.

What is your favorite quotation/motto/saying?
“You do what you have to do so that you can do what you want to do.”

What is the best thing that ever happened to you?
Establishing my own company. My wife. My daughters.

What is the worst thing that ever happened to you?
My wife having to deal with cancer, then a brain tumor, consecutively.

If you could kill one person, consequence free, who would it be and why?
Fred Phelps, and if you have to ask why, you haven’t been paying attention.

What do you do?
I make scary things for spooky people. Professionally.

How did you get started doing what you do?
There was never a question that I would be an artist/designer for a living; that I cater to spooky businesses is no surprise either. I was the kid that loved Halloween more than Christmas.
Halloween is, like, the only religious holiday that I require to have off work. Fuck Christmas.

What is your advice to other people that want to get started doing what you do?
The second you think you're entitled to something, or that the world owes you something, you're officially Doing It Wrong.

What are some of the projects you’ve worked on/finished in the past? Give us a little history if you will.
My website can do that far better than I can - http://www.sinistervisions.com
It sure can, sir! One would think that you design websites for a living. Oh, wait…

What projects are you working on now?
Dozens. The haunted attraction/Halloween industry is a very demanding mistress in October, and she has me firmly chained to her bed.
Yeah, I appreciate you taking the time out of your schedule to knock this out.

What are you watching?
Face Off on Syfy.

What are you listening to?
Christopher Young's score for Sinister.
Oh shit! SO GOOD! Didn’t we have a conversation about that?
Yeah, I think you turned me on to a list of the additional tracks that aren’t on the score.
I think I did at that.

What are you reading?
The Pumpkin Man by John Everson

Least favorite band/song?
I don't spend time dwelling on things I don't like; I certainly don't categorize and mentally archive them. That said, if I never heard "Heart of Gold" by Neil Young again, I wouldn't be upset.
I appreciate you playing by the rules.

If you could do anything other than what you do now, what would you do?
Music composer.

Who would you want to meet that you haven’t met? You get three choices:
Alive: Clive Barker
Dead: Vincent Price
Fictional: Hannibal Lecter
You haven’t met Clive Barker yet? How is that possible? Does Clive know? We have to make that happen somehow! He’d LOVE you!
I’ve had chances to “meet” him in that impersonal convention fan kind of way, but I chose not to. If and when we do meet, I want it to be as two human beings who have a chance to sit and chat, not just “Hi. I love your work. Sign this. OK, bye.” If that never happens, that’s OK. He’s certainly given enough of himself to his fans.
You really should have come out to LA when I was coordinating that Creation Weekend Of Horrors. I would have lined you up with plenty of quality time with Clive.

What’s the best and worst job you’ve ever had?
I have the best job in the world; the worst? Telemarketer.
I was a telemarketer through a temp agency for, like, two hours. I had to quit and my exit line was, “I can’t do this. I have become the very thing that I loathe most in this life. I’m sorry.”
I have almost the exact same story!

As a follow up question, tell people about the fonts you design and offer for free on your website and the hobby you have of taking pictures of people’s t-shirts that use your fonts or did I already ruin the story with the question?
I design horror fonts and give them away for free on my website, and when I find them out in the world I take pictures of them and put them on my Facebook Page. I also made a bunch of spooky soundscapes that are available for free through my website.
I totally forgot to mention your spooky soundscapes!
They are free and they are also way better than any of the generic “Halloween Sounds” CDs out there so if you want some awesome atmospheric Halloween music for your Halloween party click over and download all of it now!

Thanks for taking time out of your Horrorween schedule to let me interview you!
And, seriously, if you’ve got the money, and you need some spooky creepy design done click through to this guy’s website and try to give him all of your money.
He doesn’t work for free, nor does he have to or should he, but you know what they say, “Good work isn’t cheap and cheap work isn’t good.”

About the Interviewee:
Chad Savage was a dark artist from the moment his pudgy little hands were able to set crayon to paper. He was the kid that loved Halloween better than Christmas, rooted for Godzilla and Dracula, and really worried his Southern Baptist parents. It was very clear early on that Chad wanted to celebrate Halloween 365 days a year.
With a degree in illustration and graphic design, 20+ years' experience drawing and designing for the horror genre and over 15 years' experience in web design, Chad got his wish. Halloween, for him, is every day. His company Sinister Visions inc. is thriving, providing web design, print design, illustration, sound design, font design and more for the horror, Halloween and haunted attraction industries. Sinister Visions currently hosts/manages close to 200 dark websites; odds are you've already been to at least 10 of them.
Chad's artwork has appeared in (and on the cover of) numerous books and magazines and garnered awards from same. His original fonts have appeared on books, magazines, DVDs, CDs, TV shows and in movies. Besides running genre sites like DarkChicago.com and ZombiePinups.com, he is the Art Director and Lead Designer for Zombie Army Productions (http://www.zap23.com), Chicago's Flashback Weekend horror convention, HAuNTcon, the TransWorld Halloween & Attractions Show, Halloween Extreme and proudly sponsors numerous dark genre events and projects.
Chad has instituted/managed dark art exhibitions for a number of conventions over the last decade like HorrorFind Weekend, Flashback Weekend, the World Horror Convention and CONvergence. He remains an active participant and proponent in the dark art community.
Chad currently lives and works outside of Chicago (OK, in Indiana) with his fabulous (and tolerant) wife Alex, lovely daughters and their fairy dogmothers.
For more information and samples of his work, you can start with http://www.sinistervisions.com & http://www.chadsavage.com

About the Interviewer:
Scott Lefebvre has probably read everything you've read and can write about whatever you want him to write about.
Mostly because when he was grounded for his outlandish behavior as a hyperactive school child, the only place he was allowed to go was the public library.
His literary tastes were forged by the works of Helen Hoke, Alvin Schwartz and Stephen Gammell, Ray Bradbury, Richard Matheson, Stephen King, Clive Barker, Edgar Allan Poe, and H. P. Lovecraft.
He is the author of Spooky Creepy Long Island and a contributing author to Forrest J. Ackerman’s Anthology of the Living Dead, Fracas: A Collection of Short Friction, The Call of Lovecraft, and Cashiers du Cinemart.
His reviews have been published by a variety of in print and online media including Scars Magazine, Icons of Fright, Fatally Yours and Screams of Terror, and he has appeared in Fangoria, Rue Morgue and HorrorHound Magazine.
He is the Assistant Program Director for The Arkham Film Society and produces Electronic Music under the names Master Control and LOVECRAFTWORK.
He is currently working on a novel-length expansion of a short-story titled, "The End Of The World Is Nigh", a crowd-funded, crowd-sourced, post-apocalyptic, zombie epidemic project.
You can check out the blog for the book here: theendoftheworldisnighbook.blogspot.com
You can check out the Facebook Fan Page for the project here:
www.facebook.com/TheEndOfTheWorldIsNighBook
You can check his author profile at: www.amazon.com/Scott-Lefebvre/e/B001TQ2W9G
You can follow him at GoodReads here:
www.goodreads.com/author/show/1617246.Scott_Lefebvre
You can check out his electronic music here: soundcloud.com/master_control
And here: master-control.bandcamp.com
You can check out his videos at: www.youtube.com/user/doctornapoleon
You can check out his IMDB profile here: www.imdb.com/name/nm3678959
You can follow his Twitter here: twitter.com/TheLefebvre or @TheLefebvre
You can follow his Tumblr here: thelefebvre.tumblr.com
You can check out his Etsy here: www.etsy.com/people/arkhamscreenings
You can join the group for The Arkham Film Society here:
www.facebook.com/groups/arkhamscreenings
You can stalk his Facebook at: www.facebook.com/TheLefebvre
You can e-mail him at: Scott_Lefebvre@hotmail.com
Posted by Scott Lefebvre at 2:59 PM