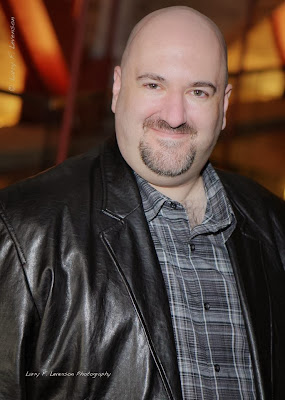 Do you have a nickname?
Sadly, no. I've never had a nickname unless you consider "Mike" a nickname but that's pretty poor.  I've tried giving myself a nickname without any luck.
What nicknames did you try to give yourself?
I tried to hang “Elvis McElric” on me for a while but that never stuck.
Shame…

Birthplace:
Defiance, OH
God damn that sounds cool!
Yeah, I was kind of thrilled when “The Prize Winner from Defiance Ohio” came out but it came and went too quick for me to catch it at the theater.

Favorite city:
Baltimore, MD
Why Baltimore?
I have a bunch of friends in Baltimore. I was fortunate enough to be invited down there for a film festival in 1997 and was just found that the folks there were very friendly and spoke my language. Now when I go there, it feels like I’m going home.
Also you can get crab as a pizza topping. It sounds gross but it’s delicious.

The first thing people notice about you is…
My poor skin.

Religion, if any?
None and very proud of it.
A man after my own blackened antitheistic heart.

Are you superstitious at all?
No, but I won't put a hat on a bed after Drugstore Cowboy.
I just watched that again last week to remind myself about how good it was. SO good.
Yeah, what the hell happened to Gus Van Sant?  I loved so many of his films from that period but he seemed to go downhill quickly. I don’t think I’ve stomached anything he’s done in years.
I got off the Gus Van Sant bus after he made that awful Psycho remake.

Do you smoke/drink? If so, what?
I don't smoke cigarettes. I drink occasionally, usually drinks based on movies like Seven & Seven (Goodfellas).
Josh Gravel has a bottle of J&B for guests because of the Italian giallo movies.

Any bad habits?
Plenty.
Pfft. Don’t delve or anything. Like what?
I over eat. I make quick judgments. And, I tend to hold onto grudges for far too long.

Current occupation / Dream job:
Currently I'm the usability expert at Detroit's power company. That means that I make their website more usable to people. It's a tough row to hoe.  As for dream job, I'd love to be able to write (what I want) full time.
You and me both, brother. At least the second part.

What do you like to do when you’re not at work?
I watch movies. I write. I edit the zine Cashiers du Cinemart. I craft The Projection Booth podcast.
I’m listening to the Fire Walk With Me episode of The Projection booth as I edit this. Love that podcast. Speaking of Cashiers du Cinemart, when is the next issue going out for print? I’m looking forward to putting my contributor’s copy on my shelf.
At the moment, I have no clue. I’ve been too busy helping out Greydon Clark on his autobiography to do any work on the issue other than forgetting who sent me what.
Well, as I said in our FB/PM conversation, you're welcome to syndicate any of my interviews from You Are Entitled To My Opinion if you maintain a web presence for Cashiers du Cinemart and want free internet content to push hits. 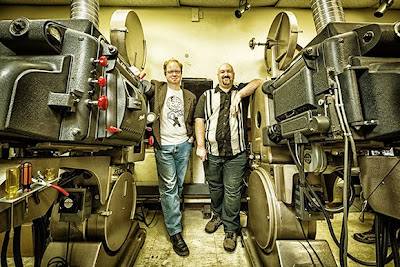 What is your zombie outbreak survival plan?
Take the bastards out, one head shot at a time.
Best answer yet!

Do you have any special skills?
I can tie a cherry stem in a knot with my tongue.
Did you read my interview? Because that’s the one thing I said I can’t do. I’m jealous of your tongue prowess.
It definitely gets attention… from the ladies.
That’s why I do this… for the ladies.

Did you go to college and, if so, what for?
Yes. I went to the University of Michigan and got a B.A. in Film/Video and Communications.

Any pets?   If so, what are they and what are their names?
Five: two cats and three dogs.  Kishi, Kanoh, Casanova, Cady, and Tess.

What is your favorite animal?
The Lemur.

Speaking of pets, any pet peeves?
I have tons. Most of them have to do with punctuation and pronunciation.
I’m much better at spelling than grammar. I hope that I do not offend.

What is your favorite quotation/motto/saying?
“It's easier to ask forgiveness than permission.”

What is the best thing that ever happened to you?
Got out of a loveless marriage.

What is the worst thing that ever happened to you?
Father died when I was two.

What is the best thing you’ve ever done?
I’m not sure if I’ve done my best yet.

What is the worst thing you’ve ever done?
I once killed a hobo just to get an erection.
In “The Town Where No One Got Off”?
It was down in Reno. I shot him, just to watch him die.

If you could kill one person, consequence free, who would it be?
Does the hobo count?
I see what you did there.

How did you get started doing what you do?
For my day job; I read a book. For my other work, I saw what I liked and what I didn’t and then did my own thing.

What is your advice to other people that want to get started doing what you do?
Be true to yourself.

What are you watching?
Top Chef, Project Runway, Jeopardy (would love to be a contestant someday), Supernatural, CSI, Ironside (the original).

What are you reading?
Three books on Orson Welles (apart from the one I’m listening to), Zaprudered, the screenplay for Bland Ambition, Building Mobile Web Apps with HTML 5.

Favorite author/book?
This is a tough one. I think my favorite author is Charles Willeford while my favorite book is The Abortion by Richard Brautigan.
I was dating a girl in college and I bought her a first edition of Brautigan’s “In Watermelon Sugar”. She decided she wanted to have sex with her home-town boyfriend over the summer break so I had to let her know that her services were no longer needed, but I wish I had gotten that book back first.
If it makes you feel any better, it’s not one of my favorite Brautigans.

Sadly it doesn’t. What are your favorite Brautigans?
The Abortion, Dreaming of Babylon, The Sombrero Fallout Incident.


Favorite band/song?
Since they only recorded three/four albums, I think that Nirvana was he most consistent band for me that I can endorse whole-heartedly. Favorite song of theirs was “Drain You.”

Least favorite band/song?
Least favorite song has to be “Hot Blooded” by Foreigner. It’s got some of worst rhymes ever. As for band, I really couldn’t stand Bush.

If you could do anything other than what you do now, what would you do?
Honestly, if I could do the podcast full time and make a decent living? I’d do that.

Who would you want to meet that you haven’t met?
Carl Sagan.

What’s the best and worst job you’ve ever had?
Worst job was working at a place called General Physics where I felt totally under-appreciated and did a lot of word processing drudgery.

I’m sure you’re sick of talking about it by now, but some of our readers might not know about it yet. Tell us a bit about “Who Do You Think You’re Fooling?” and “You’re Still Not Fooling Anybody.” and the fallout from your two short films that exposed Quentin Tarantino as a cinematic thief.
I’ll just point folks to the book Impossibly Funky: A Cashiers du CinemartCollection. The whole sordid story is there.
Oh you TEASE!
I’m going to YouTube link the two videos so readers will at least have a point of reference for what we’re talking about.
Who Do You Think You're Fooling? & You're Still Not Fooling Anybody

Pitch parade:
Give me all of your links for things you want to promote. All of them.
http://www.projection-booth.com
http://impossiblefunky.blogspot.com

About the Interviewee:
Often mistaken for the ginger screenwriter/actor of the same name, Mike White began publishing the film fanzine Cashiers du Cinemart in 1994 and has been a contributor to publications such as CinemaScope, Paracinema, Detroit's Metro Times, and Detour-Mag.com. He's served on juries at the Slamdance, Cinekink, MicroCineFest, Blue Water Film Festival, and Kansas City film festivals. Additionally, he's been featured in the documentaries David Goodis: To a Pulp and The People Vs. George Lucas. In 2010, BearManor Media published Impossibly Funky: A Cashiers du Cinemart Collection. A collection of film reviews, Cinema Detours, was released in May, 2013.

About the Interviewer:
Scott Lefebvre has probably read everything you've read and can write about whatever you want him to write about.
Mostly because when he was grounded for his outlandish behavior as a hyperactive school child, the only place he was allowed to go was the public library.
His literary tastes were forged by the works of Helen Hoke, Alvin Schwartz and Stephen Gammell, Ray Bradbury, Richard Matheson, Stephen King, Clive Barker, Edgar Allan Poe, and H. P. Lovecraft.
He is the author of Spooky Creepy Long Island and a contributing author to Forrest J. Ackerman’s Anthology of the Living Dead, Fracas: A Collection of Short Friction, The Call of Lovecraft, and Cashiers du Cinemart.
His reviews have been published by a variety of in print and online media including Scars Magazine, Icons of Fright, Fatally Yours and Screams of Terror, and he has appeared in Fangoria, Rue Morgue and HorrorHound Magazine.
He is the Assistant Program Director for The Arkham Film Society and produces Electronic Music under the names Master Control and LOVECRAFTWORK.
He is currently working on a novel-length expansion of a short-story titled, "The End Of The World Is Nigh", a crowd-funded, crowd-sourced, post-apocalyptic, zombie epidemic project.
You can check out the blog for the book here: theendoftheworldisnighbook.blogspot.com
You can check out the Facebook Fan Page for the project here: www.facebook.com/TheEndOfTheWorldIsNighBook
You can check his author profile at: www.amazon.com/Scott-Lefebvre/e/B001TQ2W9G
You can follow him at GoodReads here:
www.goodreads.com/author/show/1617246.Scott_Lefebvre
You can check out his electronic music here: soundcloud.com/master_control
And here: master-control.bandcamp.com
You can check out his videos at: www.youtube.com/user/doctornapoleon
You can check out his IMDB profile here: www.imdb.com/name/nm3678959
You can follow his Twitter here: twitter.com/TheLefebvre or @TheLefebvre
You can follow his Tumblr here: thelefebvre.tumblr.com
You can check out his Etsy here: www.etsy.com/people/arkhamscreenings
You can join the group for The Arkham Film Society here:
www.facebook.com/groups/arkhamscreenings
You can stalk his Facebook at: www.facebook.com/TheLefebvre
You can e-mail him at: Scott_Lefebvre@hotmail.com
Posted by Scott Lefebvre at 4:41 PM