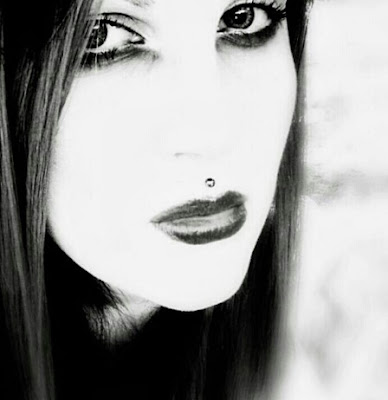 Favorite city and why?
Milwaukee, Most people say it's "dirty" but I love the old architecture, one of the only larger cities I have felt drawn towards.

How would you describe yourself physically?
That I need more tattoos.

How would someone else describe you physically?
That I have a lot of tattoos.

The first thing people notice about you is…
Again, tattoos.
Alright then, this is a question I’ve been asking tattooed people.
What is your favorite tattoo of yours? I know that everyone says they love all of their tattoos or they wouldn’t’ve gotten them permanently inked into their body. But if you could only keep one, which one would you keep?
I would have to say my chest piece one side is two venus flytraps and the other is two skulls covered in veils. It has to do with the "till death do us part" concept and the evolving cycle of love and earth.

Religion, if any?
Atheist.

Are you superstitious at all? Any phobias?
I'm not superstitious whatsoever, I was terribly afraid of flying but I overcame that a couple years back when I flew to L.A.

Do you smoke/drink? If so, what?
Drink, anything really.

Any bad habits?
I'm VERY IMPATIENT.
I am too, but I say I have a low frustration tolerance level and blame it on my ADHD.
I hear that! I get very frustrated, especially when something is taking way longer than necessary! 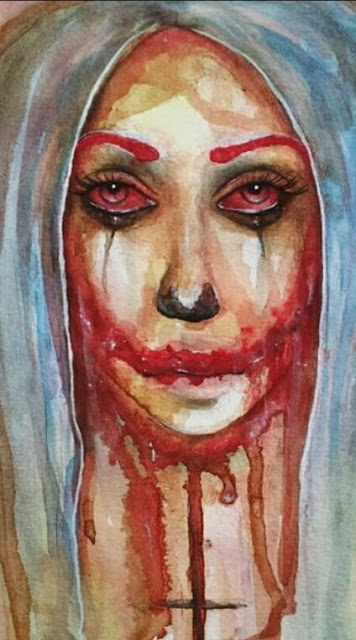 What do you like to do when you’re not at work?
Art. Hang out with my boyfriend.

What is your zombie outbreak survival plan?
Being a vampire.
So how would that work exactly? Wouldn’t all of the human blood be tainted with zombie virus? Then you’d be a zompire.
See I didn't think of it that way, I figured vampires were immune to zombie blood, but fair enough I like the sound of a zompire!

Weapon of choice:
My mind.

Do you have any special skills?
Some would say I'm a decent artist.
In my opinion, some would be correct in saying so.
Well thank you kindly!

Did you go to college and, if so, what for?
I didn't attend college.

What is your favorite animal?
I am a dog lover, but I love all animals.

Speaking of pets, any pet peeves?
4-way stops. They absolutely kill me. How is such a simple concept so difficult??

What is your favorite quotation / motto / saying?
“I don't hate people. I just feel better when they aren't around.” -Charles Bukowski. I’m a huge Bukowski fan too. I’ve got a custom-made framed poster of him on my bedroom door.
That makes me jealous!
Well, if you want, I can send you the picture and you can print up and frame one of your own. It might cost a little though. I used to work at a photo/camera/imaging shop for about a half a year when I lived in Connecticut. The pay was weak and I had to commute an hour back and forth from work, and the customers were mostly spoiled rich assholes that were absolutely sickeningly vile to deal with, so when my manager wasn’t around, which was most of the time, I would print off posters for myself on their friends on their high-quality Epson printer. Almost all of my friends got a care package of repro posters for all of their favorite movies and I made myself some really nice pieces too.


If you could kill one person, consequence free, who would it be and why?
Probably any pedophile.

What do you do?
I make art. 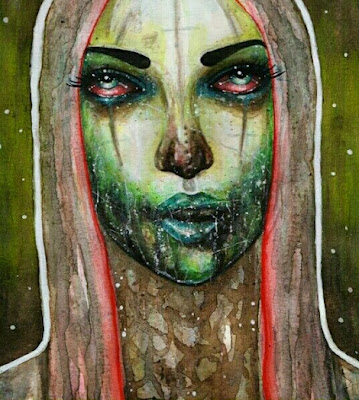 How did you get started doing what you do?
I was naturally obsessed with art at a very young age, that obsession just sort of manifested into adulthood.

What is your advice to other people that want to get started doing what you do?
Never give up! Constantly shove your work down anyone and everyone's throat, always push yourself to be better and try new techniques and always go with your emotions not what's popular.

What are some of the projects you’ve worked on/finished in the past? Give us a little history if you will.
I'm constantly working on projects for exhibitions when the opportunity arises, recently finished my first book cover, starting on a second, so that's always a lot of fun!

What projects are you working on now?
Personal paintings. 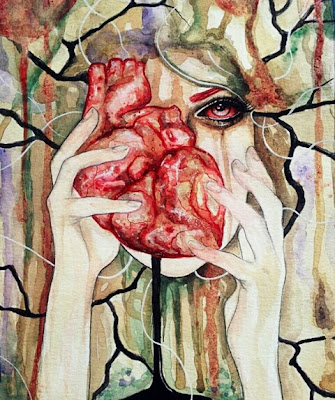 As an artist, who or what would you say were your artistic inspirations?
Zdzislaw Beksinski, Frances Bacon, Michelangelo, Laurie Lipton, Michael Hussar, Chris Mars, H.R. Giger, Roberto Ferri, Joel Peter Witkin. This list could go on for days! I am a lover of the very dark/macabe/emotional.
I remember going to the Guggenheim gallery in NYC and being arm’s length away from a Francis Bacon painting and it was truly a memorable experience. I kept getting in trouble for pointing at details of the painting, and accidentally breaking the laser eye installed to keep people from touching the paintings. I wasn’t trying to touch the painting or anything, but the laser was invisible.

What are you watching?
Sons of Anarchy.

What are you listening to?
Suffocation.

What are you reading?
DAMNED- Chuck Palahniuk.

Least favorite band / song?
Nickleback.
Perhaps ironically, I just did a second pass on an interview with an 18 year old author that likes Nickelback. But, in her defense, she’s 18. She’ll learn.
Haha! To each their own right?

Desert Island Music / Movies / Books: You know the deal. Five of each.
Lots of Bukowski, Porcupine tree/ Dead can Dance and no movies because I'd be on an island!
If you need to stock up on Bukowski for your desert island trip, I’ve got nine albums of him reading his work and we can figure out how to get them over to you and fill in any gaps in your collection.
Sounds fantastic, I could read his books and poems over and over and not get sick of them.

If you could do anything other than what you do now, what would you do?
Live deep in the woods and make a living painting.

Who would you want to meet that you haven’t met? You get three choices:
Alive. Dead. Fictional. Frank Zappa, Charles Bukowski, Jeff Buckley.

Pitch parade:
Give me all of your links for things you want to promote.   All of them.
Website: www.ambermichellerussell.com

About the Interviewee:
Born on August third, 1984 in St.Paul Minnesota, Amber Michelle Russell is a self taught artist that specializes in beautiful and emotionally captivating art. Amber focuses on fine details within the face and eyes, her work usually depicts a female figure in an emotionally vulnerable state. The use of liquids draining from the nostrils, eyes and mouth can be seen in many of Amber's pieces, this signifies anguish and release which is a direct extension of the artist herself. Creating disturbingly heart rendering images as a personal outlet. Amber has showcased her work throughout the United States in selected group exhibitions and galleries. She currently resides in Wisconsin and continues to emerge and grab the attentions of viewers internationally.
"Functioning without art as a constant in my life would be like living without water. I need to be doing something artistic and creative or I become lifeless." -Amber Michelle Russell.

About the Interviewer:
Scott Lefebvre has probably read everything you've read and can write about whatever you want him to write about.
Mostly because when he was grounded for his outlandish behavior as a hyperactive school child, the only place he was allowed to go was the public library.
His literary tastes were forged by the works of Helen Hoke, Alvin Schwartz and Stephen Gammell, Ray Bradbury, Richard Matheson, Stephen King, Clive Barker, Edgar Allan Poe, and H. P. Lovecraft.
He is the author of Spooky Creepy Long Island and a contributing author to Forrest J. Ackerman’s Anthology of the Living Dead, Fracas: A Collection of Short Friction, The Call of Lovecraft, and Cashiers du Cinemart.
His reviews have been published by a variety of in print and online media including Scars Magazine, Icons of Fright, Fatally Yours and Screams of Terror, and he has appeared in Fangoria, Rue Morgue and HorrorHound Magazine.
He is the Assistant Program Director for The Arkham Film Society and produces Electronic Music under the names Master Control and LOVECRAFTWORK.
He is currently working on a novel-length expansion of a short-story titled, "The End Of The World Is Nigh", a crowd-funded, crowd-sourced, post-apocalyptic, zombie epidemic project.
Check out the blog for the book here: theendoftheworldisnighbook.blogspot.com
Check out the Facebook Fan Page for the project here: www.facebook.com/TheEndOfTheWorldIsNighBook
Check his author profile at: www.amazon.com/Scott-Lefebvre/e/B001TQ2W9G
Follow him at GoodReads here:
www.goodreads.com/author/show/1617246.Scott_Lefebvre
Check out his electronic music here: soundcloud.com/master_control
And here: master-control.bandcamp.com
Check out his videos at: www.youtube.com/user/doctornapoleon
Check out his IMDB profile here: www.imdb.com/name/nm3678959
Follow his Twitter here: twitter.com/TheLefebvre or @TheLefebvre
Follow his Tumblr here: thelefebvre.tumblr.com
Check out his Etsy here: www.etsy.com/shop/ScottLefebvreArt
Join the group for The Arkham Film Society here:
www.facebook.com/groups/arkhamscreenings
Stalk his Facebook at: www.facebook.com/TheLefebvre
E-mail him at: Scott_Lefebvre@hotmail.com
Posted by Scott Lefebvre at 10:34 PM