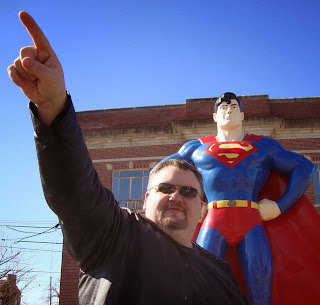 Do you have a nickname or what do your friends call you?
I’ve been called a lot of things, but we’ll stick with Bobby.

Favorite city and why?
Good question. Not sure I have a favorite.
I do enjoy visiting Chicago, San Diego, and Charleston.

How would you describe yourself physically?
Big guy.

How would someone else describe you physically?
Fat.

The first thing people notice about you is…
I have no idea.

Are you superstitious at all?
Not really.

Any phobias?
Like Indiana Jones, I have a thing about snakes.

Do you smoke/drink? If so, what?
Nope to both.

Any bad habits?
A few.

What do you like to do when you’re not at work?
I like to read, watch TV, go to movies, take walks, and the like. You know, normal stuff.

What is your zombie outbreak survival plan?
I’ll probably be one of the first ones killed. Of course, it may be weeks before I venture out of the writing cave I call my office to realize it had happened.

Do you have any special skills?
Jack of all trades, master of few.

Did you go to college and, if so, what for?
Yes. I studied art and journalism.

What is your favorite animal?
Shark (as long as I’m not in the water with it)

Speaking of pets, any pet peeves?
Negativity (I should probably stay off the internet, huh?)
Probably. If not I’d suggest you wear a helmet.

Favorite / Least favorite Food:
I love pizza / I am not a fan of Chinese food.

What is your favorite quotation / motto / saying?
“Smile you sonuva… BOOM!” JAWS / Always be prepared / “He who lasts laugh… obviously didn’t get the joke.”  (got that one off a bazooka gum comic when I was a kid)

What is the best thing that ever happened to you?
I sold my first novel. Then I sold my second.

What is the worst thing that ever happened to you?
Lost my job in a layoff. Had to sell my house. I loved my house.

Ever had your heart broken? Is there a story worth telling behind your answer?
Yes. I’ll save that story for a book plot one day.

Ever broken someone’s heart? Is there a story worth telling behind your answer? Maybe. Not intentionally.

What is the best thing you’ve ever done?
I’m not sure. Will have to think it over.

What is the worst thing you’ve ever done?
I’m not really sure. Will have to think about it.

If you could kill one person, consequence free, who would it be and why?
No one comes immediately to mind, but I’m sure if I gave it some thought…  I don’t often think about killing people (except in my books, of course), but I could give you a list of people that deserve a swift kick in the ass though.

What do you do?
I am a writer of novels, comic books, graphic novels, short stories, screenplays, media tie-ins, and more. I work for a variety of publishers as a freelancer.

How did you get started doing what you do?
Getting the first gig was the hardest, but I got into comics the old fashioned way, I submitted my work and eventually found work that I then used to find more work, a process I keep repeating to this day.

What is your advice to other people that want to get started doing what you do?
Be persistent. Stick with it. If you want to do it as a career then you need to treat it like a job. That means long days, sleepless nights, and a lot of hard work, but in the end it’s worth it to attain your goals.

What are some of the projects you’ve worked on/finished in the past?
Give us a little history if you will.
This could be a long list so I’ll just pick a couple. You can find the full list of my work at www.bobbynash.com. Novels: Evil Ways, Deadly Games!, Earthstrike Agenda, and more. Anthologies/short stories: Lance Star: Sky Ranger, Domino Lady, A Fistful of Legends, The Spider, Green Hornet, and more. Comics: Lance star: Sky Ranger, Demonslayer, Jungle Fantasy, Domino Lady/Sherlock Holmes, Yin Yang, All-Star Pulp Comics, and more.

What projects are you working on now?
I just finished a couple of short stories for anthologies and am doing pre-production work on two novels: Honey West/Domino Lady and Ghost Gal.

What are you watching?
My top three TV shows at the moment are Person of Interest, Arrow, and Sons of Anarchy.

What are you listening to?
I like a wide variety of music. Kind of on an Elvis kick at the moment.

What are you reading?
This Girl For Hire, a Honey West novel.

Favorite author / book?
This is one of those answers that will undoubtedly be different every time it’s asked, but I really enjoy the work of Michael Connelly. I love the Harry Bosch novels.

Least favorite band / song?
I am not a fan of rap. It’s just not my taste.

Desert Island Music / Movies / Books: You know the deal. Five of each.
Another one of those suggestive lists. Here’s where it stacks up today.
Music: The greatest hits of The Who, Elvis, Aerosmith, Johnny Cash, and Tom Petty.
Movies: Tombstone, Star Trek II: Wrath of Khan, JAWS, Raider of the Lost Ark, For Your Eyes Only
Books: Airframe by Michael Crichton, JLA/Avengers by Kurt Busiek and George Perez, A Darkness More Than Night by Michael Connelly, New Frontier by Darwyn Cooke, One Grave Too Many by Beverly Connor

If you could do anything other than what you do now, what would you do?
I would like to direct.

Who would you want to meet that you haven’t met?
You get three choices: Another one of those suggestive lists. Here’s where it stacks up today.
Alive: Morgan Freeman. Seems like a cool guy.
Dead: Elvis. I’d love to see an Elvis concert live.
Fictional: Richard Castle. I think we’d have a lot in common.

What’s the best and worst job you’ve ever had?
The best: writer. The worst: sometimes that’s also writer, but I really hated working fast food when I was younger.

Are there any questions that I didn’t ask that you wished I had asked that you would like to answer now?
Nothing I can think of off the top of my head.
Anyone you recommend I interview that you can put me in touch with?
Maybe. Let me check.

Got any questions for me?
Nothing comes to mind.

Thanks for letting me subject you to being interviewed!
My pleasure. Thanks.

About the Interviewee:
About Bobby Nash:
From his secret lair in the wilds of Bethlehem, Georgia, 2013 Pulp Ark Award Winning Best Author, Bobby Nash writes a little bit of everything including novels, comic books, short prose, graphic novels, screenplays, media tie-ins, and more.
Between writing deadlines, Bobby is an actor and extra in movies and television, including appearances in Deviant Pictures’ Fat Chance, FOX’s The Following, and more. He is also the co-host of the Earth Station One podcast (www.esopodcast.com) and a member of the International Association of Media Tie-in Writers.
Bobby was named Best Author in the 2013 Pulp Ark Awards, his first professional writing award. Rick Ruby, a character co-created by Bobby and author Sean Taylor also snagged a Pulp Ark Award for Best New Pulp Character of 2013.
For more information on Bobby Nash please visit him at www.bobbynash.com, www.facebook.com/AuthorBobbyNash, and www.twitter.com/bobbynash, among other places across the web.

About the Interviewer:
Scott Lefebvre has probably read everything you've read and can write about whatever you want him to write about.
Mostly because when he was grounded for his outlandish behavior as a hyperactive school child, the only place he was allowed to go was the public library.
His literary tastes were forged by the works of Helen Hoke, Alvin Schwartz and Stephen Gammell, Ray Bradbury, Richard Matheson, Stephen King, Clive Barker, Edgar Allan Poe, and H. P. Lovecraft.
He is the author of Spooky Creepy Long Island and a contributing author to Forrest J. Ackerman’s Anthology of the Living Dead, Fracas: A Collection of Short Friction, The Call of Lovecraft, and Cashiers du Cinemart.
His reviews have been published by a variety of in print and online media including Scars Magazine, Icons of Fright, Fatally Yours and Screams of Terror, and he has appeared in Fangoria, Rue Morgue and HorrorHound Magazine.
He is the Assistant Program Director for The Arkham Film Society and produces Electronic Music under the names Master Control and LOVECRAFTWORK.
He is currently working on a novel-length expansion of a short-story titled, "The End Of The World Is Nigh", a crowd-funded, crowd-sourced, post-apocalyptic, zombie epidemic project.
Check out the blog for the book here: theendoftheworldisnighbook.blogspot.com
Check out the Facebook Fan Page for the project here: www.facebook.com/TheEndOfTheWorldIsNighBook
Check his author profile at: www.amazon.com/Scott-Lefebvre/e/B001TQ2W9G
Follow him at GoodReads here:
www.goodreads.com/author/show/1617246.Scott_Lefebvre
Check out his electronic music here: soundcloud.com/master_control
And here: master-control.bandcamp.com
Check out his videos at: www.youtube.com/user/doctornapoleon
Check out his IMDB profile here: www.imdb.com/name/nm3678959
Follow his Twitter here: twitter.com/TheLefebvre or @TheLefebvre
Follow his Tumblr here: thelefebvre.tumblr.com
Check out his Etsy here: www.etsy.com/shop/ScottLefebvreArt
Join the group for The Arkham Film Society here:
www.facebook.com/groups/arkhamscreenings
Stalk his Facebook at: www.facebook.com/TheLefebvre
E-mail him at: Scott_Lefebvre@hotmail.com
Posted by Scott Lefebvre at 7:10 PM