Do you have a nickname or what do your friends call you?
Nope, no real nickname to speak of, however people often refer to me as 'Rob Zombie, or Zombie Rob'.

Favorite city and why?
To visit, Toronto, perhaps to move/live, Montreal.

How would you describe yourself physically?
A big bald guy with a white goatee.

How would someone else describe you physically?
A big bald guy with a white goatee.

The first thing people notice about you is…
My long white beard.

Religion, if any?
Personal.

Are you superstitious at all? Any phobias?
I believe in Karma, I'm not that great with heights and crowds at times...
I only like crowds if I’m in front of them. 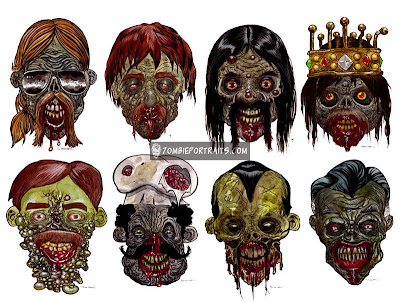 Do you have any special skills?
I can do most anything if I feel like it!

Did you go to college and, if so, what for?
Yup, went to college for graphic design way before there were computers...

Any pets?   If so, what are they and what are their names?
Pixie Frog named Gigantis, Common Toad named Mr Toadlee.

What is your favorite animal?
Frogs / Toads.

Speaking of pets, any pet peeves?
People who rip off others...

What is your favorite quotation / motto / saying?
"What's the fucking difference?"

What is the best thing that ever happened to you?
Birth.

What is the worst thing that ever happened to you?
It hasn't happened yet....

Ever had your heart broken? Is there a story worth telling behind your answer?
Many times…

Ever broken someone’s heart? Is there a story worth telling behind your answer?
I doubt it.

What is the best thing you’ve ever done?
It really depends on who I did it for and what they got out of it. I don't really think that I've done anything that I can categorize as the 'Best' thing I've ever done.

What is the worst thing you’ve ever done?
Same as above... and I'm sorry.

If you could kill one person, consequence free, who would it be and why?
Literally no one.

What do you do?
I draw Zombies and turn people into the undead for a living....

How did you get started doing what you do?
After many years of constant practice, it just sort of happened...

What is your advice to other people that want to get started doing what you do?
Don't! Be an artist, but don't become a Zombie Portrait artist, the world already has a good one and that's all it really needs! 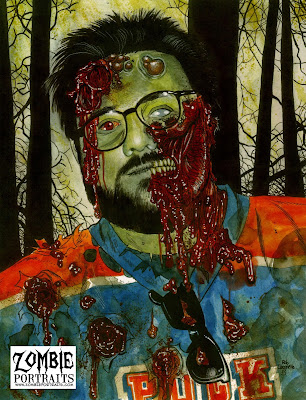 What are some of the projects you’ve worked on/finished in the past? Give us a little history if you will.
Figured I'd just include my short bio. Feel free to edit it as you'd like…
I think I’ll plug that in as your bio if you don’t mind. It’s an excellent bio.

What projects are you working on now?
Right now, just the Christmas Zombie Portrait rush!
Working with zombies, your strong season is probably September into October for Halloween, and then a lesser secondary run for people that are into zombies that celebrate Christmas, at least that’s what I noticed from my years working as a brand manager for a horror-genre merchandising company. Would you say that’s true for you too or is your work pretty consistent year-round?
I'm fairly consistent work wise all year round, but more so into the fall months and right into Christmas, starting with September. It usually gets pretty slow come summer, so I try to book other jobs and teaching gigs.

What are you watching?
Not really that much to be honest. I catch the Walking Dead every once and a while, just to see the new Zombies. That's about it.

What are you listening to?
Tool, Queens of the Stone Age, Cypress Hill, not too much new stuff.

What are you reading?
Very little time to read. I'm increasing the size of my Comic Book Collection. Whenever I add to it, I skim the new additions. Mostly 70-80's Marvel and DC.

Favorite author / book?
Basically it's just comics. I loved the John Byrne Fantastic Fours' Anything Kirby really, the John Buscema Tom Palmer Avengers...
It may be an age thing, but I’m a huge fan of the Claremont/Nocera era X-Men.
I’m also a big fan of Stray Bullets and Beautiful Stories for Ugly Children.

Least favorite band / song?
Anything by KISS, Miley Cyrus, I could go on forever with this one.... 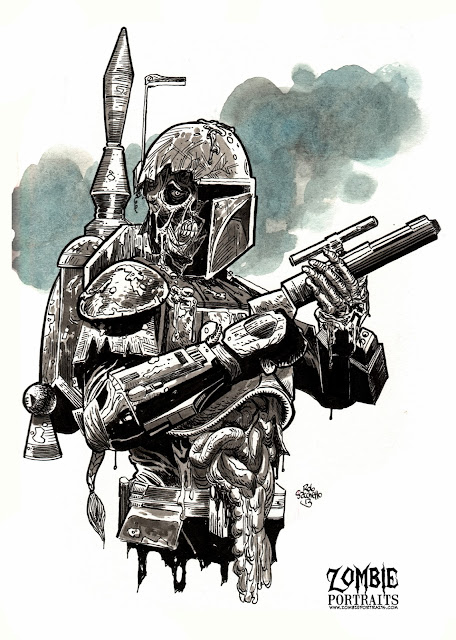 If you could do anything other than what you do now, what would you do?
Just be incredibly wealthy and be a philanthropist...

Who would you want to meet that you haven’t met? You get three choices:
Alive. Dead. Fictional.
Frank Frazetta, Jack Kirby, John Buscema.

What’s the best and worst job you’ve ever had?
Best, what I do now. Worst, a window and framing company.

Are there any questions that I didn’t ask that you wished I had asked that you would like to answer now?
Nope, I think you've covered everything incredibly thoroughly!! This however is a gentleman you might find fascinating, Joel Pednaud. He runs the Human Marvels website and is soon to be coming out with a book! You can message him at https://www.facebook.com/j.t.pednaud his site is  http://thehumanmarvels.com/

About the Interviewee:
Hi there, Rob Sacchetto here and here's my capsulized art biography.
I've been a freelance artist for over 25 years working in many different art fields from doing strictly private pieces, to being an in house creative artist for a large silk screening company to teaching art through the “Learning Through the Arts' initiative providing art lessons to junior kindergarten through to grade six. I've worked on everything from motion picture storyboards to producing and publishing my own 150 page graphic novel and countless other art related projects. I've created logo designs, character designs, and many other artist for hire jobs over the world over, literally too many to mention here, from National Geographic UK, to Animal Planet to Australian comic book publishers. In 2006 I started an online service in which I hand paint people as the living dead, called Zombie Portraits. People simply send me a J-peg of themselves or a loved one and I hand illustrate them as zombies using traditional means like paint, pen and ink, with no computer photo-shopping involved. The customer receives a high res J-peg and has the original painting mailed to them. So far I have zombified over 3,000 people all over the world! Feeling that I wasn't drawing enough zombies, I started Zombie Daily, a blog where I post a new original zombie drawing or painting every day! This site was started in 2008 and so far there are over 1400 posts and counting as I still update with new content on a daily basis. The formation of Zombie Daily led the publishing company Ulysses press to offer me two book deals, one for, "The Zombie Handbook: How to Identify the Living Dead and Survive the Coming Zombie Apocalypse", which last year was translated to Spanish, and titled “Apocolipsis Zombie,” and my next book, "Zombiewood:The Celebrity Dead Exposed". My Zombie Portrait service also caught the attention of noted zombie author Jonathan Maberry, which led him to include me as a named character in his book "Rot and Ruin". I also created the chase card illustrations for that book and his follow-up books "Dust and Decay",“Flesh and Bone”, and the final book in the series, “Fire and Ash” for Simon and Shuster. I'm featured in the documentary "Zombiemania" and provided the morphing Zombie Portrait drawings for me and the other noted zombie experts who were interviewed, including George Romero, Tom Savini, Max Brooks and Greg Nicotero. My zombie art has been licensed for use on everything from puzzles to skateboard decks, T shirts, journal covers, comic books and many other products. Most recently, I was asked by the producers of “The Talking Dead” program to do a Zombie Portrait of the host of the show, Chris Hardwick, which was given to him as a Christmas gift. The United States Playing Card Co. Will has released a full 56 card deck of my Zombie Art this past June 2013, entitled “Everyday Zombies”. In 2013 I released my first graphic novel entitled 'Rob Sacchetto's Cape Fear', and have a prequel and two sequels planned for release as well. With both the Zombie Portraits, and the Zombie Daily, sites, I believe that I’ve drawn more zombies than anyone on the planet. There is of course more, but this is but a brief overview of my entire art career. Please feel free to peruse my www.zombiepotraits.com site which includes the vast Zombie Daily Art section, or to reach me on Facebook : https://www.facebook.com/OriginalZombiePortraits

About the Interviewer:
Scott Lefebvre has probably read everything you've read and can write about whatever you want him to write about.
Mostly because when he was grounded for his outlandish behavior as a hyperactive school child, the only place he was allowed to go was the public library.
His literary tastes were forged by the works of Helen Hoke, Alvin Schwartz and Stephen Gammell, Ray Bradbury, Richard Matheson, Stephen King, Clive Barker, Edgar Allan Poe, and H. P. Lovecraft.
He is the author of Spooky Creepy Long Island and a contributing author to Forrest J. Ackerman’s Anthology of the Living Dead, Fracas: A Collection of Short Friction, The Call of Lovecraft, and Cashiers du Cinemart.
His reviews have been published by a variety of in print and online media including Scars Magazine, Icons of Fright, Fatally Yours and Screams of Terror, and he has appeared in Fangoria, Rue Morgue and HorrorHound Magazine.
He is the Assistant Program Director for The Arkham Film Society and produces Electronic Music under the names Master Control and LOVECRAFTWORK.
He is currently working on a novel-length expansion of a short-story titled, "The End Of The World Is Nigh", a crowd-funded, crowd-sourced, post-apocalyptic, zombie epidemic project.
Check out the blog for the book here: theendoftheworldisnighbook.blogspot.com
Check out the Facebook Fan Page for the project here: www.facebook.com/TheEndOfTheWorldIsNighBook
Check his author profile at: www.amazon.com/Scott-Lefebvre/e/B001TQ2W9G
Follow him at GoodReads here:
www.goodreads.com/author/show/1617246.Scott_Lefebvre
Check out his publishing imprint Burnt Offerings Books here:
https://www.facebook.com/pages/Burnt-Offerings-Books/1408858196016246
And here: http://burntofferingsbooks.blogspot.com/
Check out his electronic music here: soundcloud.com/master_control
And here: master-control.bandcamp.com
Check out his videos at: www.youtube.com/user/doctornapoleon
Check out his IMDB profile here: www.imdb.com/name/nm3678959
Follow his Twitter here: twitter.com/TheLefebvre or @TheLefebvre
Follow his Tumblr here: thelefebvre.tumblr.com
Check out his Etsy here: www.etsy.com/shop/ScottLefebvreArt
Join the group for The Arkham Film Society here:
www.facebook.com/groups/arkhamscreenings
Stalk his Facebook at: www.facebook.com/TheLefebvre
E-mail him at: Scott_Lefebvre@hotmail.com
Posted by Scott Lefebvre at 9:13 PM