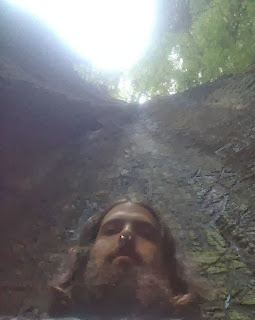 Do you have a nickname or what do your friends call you?
Mike or Mikey Knives.

Favorite city and why?
Providence I haven't lived anywhere else outside of Lil Rhody so I feel as if I don't have a proper opinion of other places. There are cities I love to go to but I feel my opinions of them are based on touring and vacationing there are biased due to that.

How would you describe yourself physically?
Long haired and bearded with lots of tattoos and piercings.

Religion, if any?
Atheist/Agnostic.

Are you superstitious at all? Any phobias?
I believe in ghosts.

What do you like to do when you’re not at work?
I watch lots of movies, work on my place, work on my art projects, cook, hang with friends, play video games, and play Cave Evil when time allows.

What is your zombie outbreak survival plan?
Kill zombies till I die and come back as a zombie then kill humans until I die.

Do you have any special skills?
I guess I'm kinda a jack of most trades.

If you went to college, did you manage to pay off your student loans?
No loans

What is your favorite animal?
Unknown.

Speaking of pets, any pet peeves?
None.

What is your favorite quotation / motto / saying?
Monotony is the vice of life. You'll be dead soon and so will your shitty attitude.

What is the best thing that ever happened to you?
Hasn't happened yet.

What is the worst thing that ever happened to you?
My childhood.

Ever had your heart broken? Is there a story worth telling behind your answer?
I thought it had been broken once but I realize now it wasn't love it was lust. No interesting story behind it.

Ever broken someone’s heart? Is there a story worth telling behind your answer?
I don't know hope not.

What is the best thing you’ve ever done?
It hasn't happened yet.

What is the worst thing you’ve ever done?
There's too many that tie with 1st place.

If you could kill one person, consequence free, who would it be and why?
The list is too long for that one. I rather go with permanent life long humiliation. I think that's better than killing them cause they'd have to live with it the rest of their lives.

What do you do?
I make tentacle monsters and tour with bands among other things.

How did you get started doing what you do?
It just happened one day went on the road with a band and the next thing I know I started making creatures.

What is your advice to other people that want to get started doing what you do?
Just start small and work your way up. Sometimes you got to make compromises with how you afford your lifestyle but if you really want to do it you will find a way.  Also never give up never never surrender.

What are some of the projects you’ve worked on/finished in the past? Give us a little history if you will.
I recently had some work up at a local restaurant that was in conjunction with the Providence Necronomicon. It was two 42 foot long centipede creatures. Previous to that I roadied for Black Pus on a month long tour. I released a live video comp of selected live acts that I had recorded over the years. Before that I had work displayed at the Dirt Palace window.  I'm also in a band called Vile Reign.

What projects are you working on now?
Right now I'm thinking of taking my work and applying it to clothing namely hoodies. Possibly dabbling in making quilts based on my work. And always making the tentacle monsters.

What are you watching?
I've been watching lots of documentaries that revolve around Alaska. That and watching Adventure Time and Futurama.
Why Alaska?
Well it started with watching a documentary on grizzlies in Alaska. There after I got on an Alaska kick that and Netflix kept suggesting them. I also have found that state interesting due to the cities being so close to vast open wilderness.  It's one of the few areas in the nation were there are cities with no direct highway access and you can be in a downtown area and watch a grizzly and a moose go head to head.

What are you listening to?
King Diamond, Amon Amarth, Portal, and Morbid Angel.

What are you reading?
Articles linked through Facebook. / Metabarons

Least favorite band / song?
The radio and everything about it.

Desert Island Music / Movies / Books: You know the deal. Five of each.
Neil Young Harvest,  Amon Amarth Once Sent From The Golden Hall, Mercyful Fate Mellisa, Burzum Burzum, Yes Greatest Hits
Ghostbusters, David Lynch's Dune, Big Trouble In Little China, Spaceballs, and an unmarked extended play VHS full of whatever.
If I could take all the comics I own that would be enough.

If you could do anything other than what you do now, what would you do?
I'd be a dictator of a nation maybe something like cobra commander but with super powers and legions of followers who follow me like a god.
So pretty much you want to grow up to be Doctor Doom.
Yeah pretty much minus the extreme disfigurement of Victor Von Doom.

Who would you want to meet that you haven’t met? You get three choices:
Alive. Dead. Fictional.
Kurt Russell, A caveman or Albert Einstein, God/Jesus/  or Spider-Man

What’s the best and worst job you’ve ever had?
Best job garbage man worst job working at any department store.
What was so great about being a garbage man? Why don’t you do it anymore?
Well it was the people I worked with that helped make it a great job. Also all the free shit people throw out and we were done working between 10:30 and 1pm. We couldn't leave but we were allowed to hang in the break room till clock out. So most of us napped and watched tv. Long story short I saw a lot of dangerous stuff  happen and I thought it was time to move on and if you went union you had to start as the bottom man. Which meant you had to drive the recycling truck or a garbage truck.

Are there any questions that I didn’t ask that you wished I had asked that you would like to answer now?
Nah.

Anyone you recommend I interview that you can put me in touch with?
Dave Fischer, dave@cca.org
Ha! I love Dave but he got mad at me because of a conversation we had in a comment thread we had in response to a “911 TRUTH” graffiti I posted a picture of that I saw on my walk home one day and he dropped me as an imaginary friend.
The Internet… enabling people to develop irrevocable differences since the mid 90s.
Yeah I love Dave too. That sucks. But that is something he could do not sure what the pic was of. Yeah that's what the internet offers.

Got any questions for me?
Nah.

Thanks for letting me subject you to being interviewed!
You're welcome.

About the Interviewee:
Would sleep all day if he could.

OPTIONAL: Prove you’re not a replicant.

Question 1:
A tortoise lays on its back, its belly baking in the hot sun beating its legs trying to turn itself over but it can't, not without your help, but you're not helping. Why is that?
I must be dead or paralyzed.

Question 2:
Describe in single words, only the good things that come in to your mind about your mother.
Unit 634 incubation chamber was just as sufficient as any other. So in single words adequate and efficient.

Question 3:
It's your birthday. Someone gives you a calfskin wallet.
The calf is already dead might as well not let it go to waste.

Question 4:
You've got a little boy. He shows you his butterfly collection plus the killing jar.
Life is death it's the circle of life annnnyawhenya.
Question 5:
You're watching television. Suddenly you realise there's a wasp crawling on your arm.
Well hopefully it bites me and I turn into wasp woman and can change back when doused with cold water.

Question 6:
You're reading a magazine. You come across a full-page nude photo of a girl. You show it to your husband. He likes it so much he hangs it on your bedroom wall.
I must be gay if I have a husband or I'm wasp woman due to that wasp biting me. Either way I'm cool with nude spread.

Question 7:
You're watching a stage play. A banquet is in progress. The guests are enjoying an appetizer of raw oysters. The entree consists of boiled dog.
I hear boiled dog isn't so tasty but yay about the oysters!

Posted by Scott Lefebvre at 2:49 AM