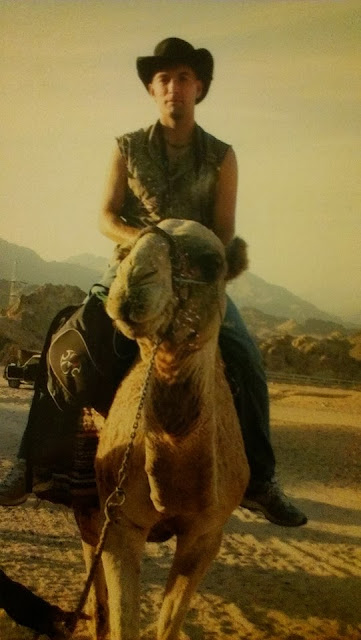 Do you have a nickname or what do your friends call you?
Friends call me 'chief', although as a young kid I was nicknamed 'Broomstick'.
Why were you nicknamed Broomstick?
Well, Broomstick comes from ‘Bedknobs and Broomsticks’, I guess I may have had an obsession with it when I was a kid and someone called me it. Nobody calls me it now though, sadly.

Favorite city and why?
Los Angeles, mainly because of the culture divide. One minute you are walking in Beverley Hills, the next you are rubbing shoulders with homeless guys.

How would you describe yourself physically?
Tall, medium build.

How would someone else describe you physically?
Sexy mofo.

The first thing people notice about you is…
Eye colour.

Religion, if any?
Many, all, and none.

Are you superstitious at all? Any phobias?
I have a fear and phobia of cats. I want them all dead.

Do you smoke/drink?   If so, what?   Any bad habits?
Rarely drink, unless Budweiser, don't smoke, and bad habits are sticking my fingers up to every traffic warden I see.

Current occupation / Dream job:
Current job is working with words/letters, although dream job would be to be a superhero. Or a firefighter with superhero powers.

What do you like to do when you’re not at work?
Climb trees and get off the 'grid' for a few hours.

What is your zombie outbreak survival plan?
Hide. I know I would die early on. I once got chased by the police and froze in fear, so if the undead were chasing me, I would be as good as finished.

Do you have any special skills?
I can climb trees. And hide well.
You should start working on a tree fort to prepare for the zombie apocalypse.
Funny you should say that. I have many bases I have made in bushes and trees around the woods near my house. Not sure they would protect me, but I know them inside out so could escape. I hope.

Did you go to college and, if so, what for?
History and Psychology.

If you went to college, did you manage to pay off your student loans?
Loans? I got a job. Pizza delivery man.

Any pets?   If so, what are they and what are their names?
A dog called 'Flint', but he died.

What is your favorite animal?
Sharks. I could watch them all day long.

Speaking of pets, any pet peeves?
Dog owners who dress their dogs in coats.

What is your favorite quotation / motto / saying?
'Death makes angels of us all.'

What is the best thing that ever happened to you?
Seeing my unborn child in the scan pictures.

What is the worst thing that ever happened to you?
Seeing my grandmothers death in a vision.

Ever had your heart broken? Is there a story worth telling behind your answer?
Yes, and the story is long. Basically, she found someone better than me. I screwed up. I went crazy inside and left town. The end.

Ever broken someone’s heart? Is there a story worth telling behind your answer?
Yes I am a heart breaker. I once told my ex that I was gay and receiving treatment for psychotic episodes. She still kept on coming over, so I left town (again).

What is the best thing you’ve ever done?
Leaving town. Opened up the whole world to me. Met so many amazing people. So many stories.

What is the worst thing you’ve ever done?
Broke into a room and stole some phone cards. She was vile though. Made my life hell, and I needed a phonecard.

If you could kill one person, consequence free, who would it be and why?
Rupert Murdoch for killing television and sports channels.

What do you do?
Write.

How did you get started doing what you do?
Always enjoyed it, even as a child. As a youngster, writing would distract me from the family problems.

What is your advice to other people that want to get started doing what you do?
Don't be in it for the money.
Are you able to support yourself by writing?
Barely. I have never been one for having a flashy car, or expensive TV, so my costs are quite low. If I ever made millions, I would buy a cave and do it out. And then reward all those who have supported me. I don’t forget those who help and support.

What are some of the projects you’ve worked on/finished in the past? Give us a little history if you will.
Currently have two novels, 'End Storm', and 'Earthed', both featuring zombies, with one the prequel to the other. Check out the website at www.mazmarik.weebly.com for more info....
I clicked through and checked out your page. I love that you made a “book trailer”. How did you come up with that idea? Did you make the video? Do you think making a video helped with the sale of the book?
Well, with book covers, trailer and transmission promotions, I write down the idea, or describe the cover and luckily I have some very talented friends. Neil Pearson, who helped with posters and original book covers, and Ish Ferris who edits my work, makes the book cover designs a reality and took control of the trailer idea.
I could not do it on my own, and I am eternally thankful for the help of the team around me.
As for sales, It is hard to tell if sales increased because of the trailer, but I always go with the idea that it did no harm, and a lot of people did comment on the trailer, so word spread at least… every little helps. 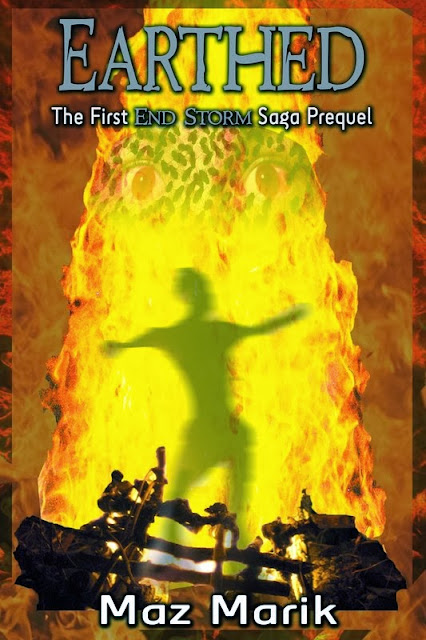 What projects are you working on now?
Currently working on two other novels, and a few short stories...

What are you reading?
Nothing, but just finished 'Unnatural Selection' by Thomas Pryce which was very good.

If you could do anything other than what you do now, what would you do?
Kids entertainer.
Clown or magician or other?
Well, I would organise ‘treasure hunts’, or ‘mini olympics’, that sort of thing. My name was ‘Monkey Maz’, and I told the kids I fell out of an aeroplane and was rescued by a group of monkeys. They were young enough to believe it. I wish I was a magician, it is a lot more interesting that an ape man.

Who would you want to meet that you haven’t met? You get three choices:
Alive. Dead. Fictional.
Alive would be Schwarzenegger, Dead would be Jim Morrison or Christopher Reeve, and fictional would be Michael Myers.
Why would you want to meet Michael Myers? Don’t you think the experience would be a bit stabby?
I think he needs someone to talk to. He had a troubled past. Sure, he has a few issues, but a cup of coffee and scone and I think I could help him out.

What’s the best and worst job you’ve ever had?
Best would be lifeguard, and worst would be Pizza delivery driver.

Are there any questions that I didn’t ask that you wished I had asked that you would like to answer now?
Yes. And the answer is 16.

Anyone you recommend I interview that you can put me in touch with?
Ian Woodhead is always up for a laugh, and Thomas Pryce is a great writer.
Cool! I’ll send them an invite. Actually, I checked and I already sent Ian an interview invite on October 22nd, so if you want to put a bug in his ear maybe we can get the ball rolling on that one. I sent Thomas a friend request.
Ian won’t turn it down. Just say you love his jokes, he will be your best friend! As for Thomas, his book was one of the best I have read for some time.

Got any questions for me?
How do you get your kicks?
On route 66? I’m really very boring. Except when I’m not.
Ooh, I love a man of mystery.

About the Interviewee:
I am very anti-social. I once won an award at work for being 'hermit of the year', but failed to turn up to the events ceremony to pick the award up.


OPTIONAL: Prove you’re not a replicant.

Question 1:
A tortoise lays on its back, its belly baking in the hot sun beating its legs trying to turn itself over but it can't, not without your help, but you're not helping. Why is that?
Because I am cooking it. The zombie apocalypse has started, and I need food.

Question 2:
Describe in single words, only the good things that come in to your mind about your mother.
Patient. Forgiving. Caring. Loving.
Question 3:
It's your birthday. Someone gives you a calfskin wallet.
I would make sure I kept the receipt and swap it for something half decent.
Question 4:
You've got a little boy. He shows you his butterfly collection plus the killing jar.
Praise his work.
Question 5:
You're watching television. Suddenly you realise there's a wasp crawling on your arm.
Scream like a girl. Flick it off. Stamp on it.
Question 6:
You're reading a magazine. You come across a full-page nude photo of a girl. You show it to your husband. He likes it so much he hangs it on your bedroom wall.
I would be unhappy that I have a husband. I would wonder how this happened.

Question 7:
You're watching a stage play. A banquet is in progress. The guests are enjoying an appetizer of raw oysters. The entree consists of boiled dog.
I would vomit. Without doubt. When it comes to food, I am fussy....
Posted by Scott Lefebvre at 2:43 AM